Ever heard of Heise Road? How about Zoeller Road? Ward Road? Hoffman Road? Old Lower East Hill Road? No? Well if you live in Buffalo, NY or in Erie County, you should. These roads are all maintained by Erie County with the sales taxes that you pay each and every time you buy something and the property taxes you or your landlord pay.

When you pay sales taxes in New York State a base 4% tax goes to the State and the remaining amount goes to the county government, the amount of this remainder varies by county and is capped at an additional 4.875%. In Erie county the amount is an additional 4.75%, which puts in line with the highest rates outside of New York City and Westchester. The property taxes in Erie County municipalities are among the highest in the country. These high rates are partially due to the fact that the developed land area in Erie county has increased by 166 square miles while the population has stayed the same. 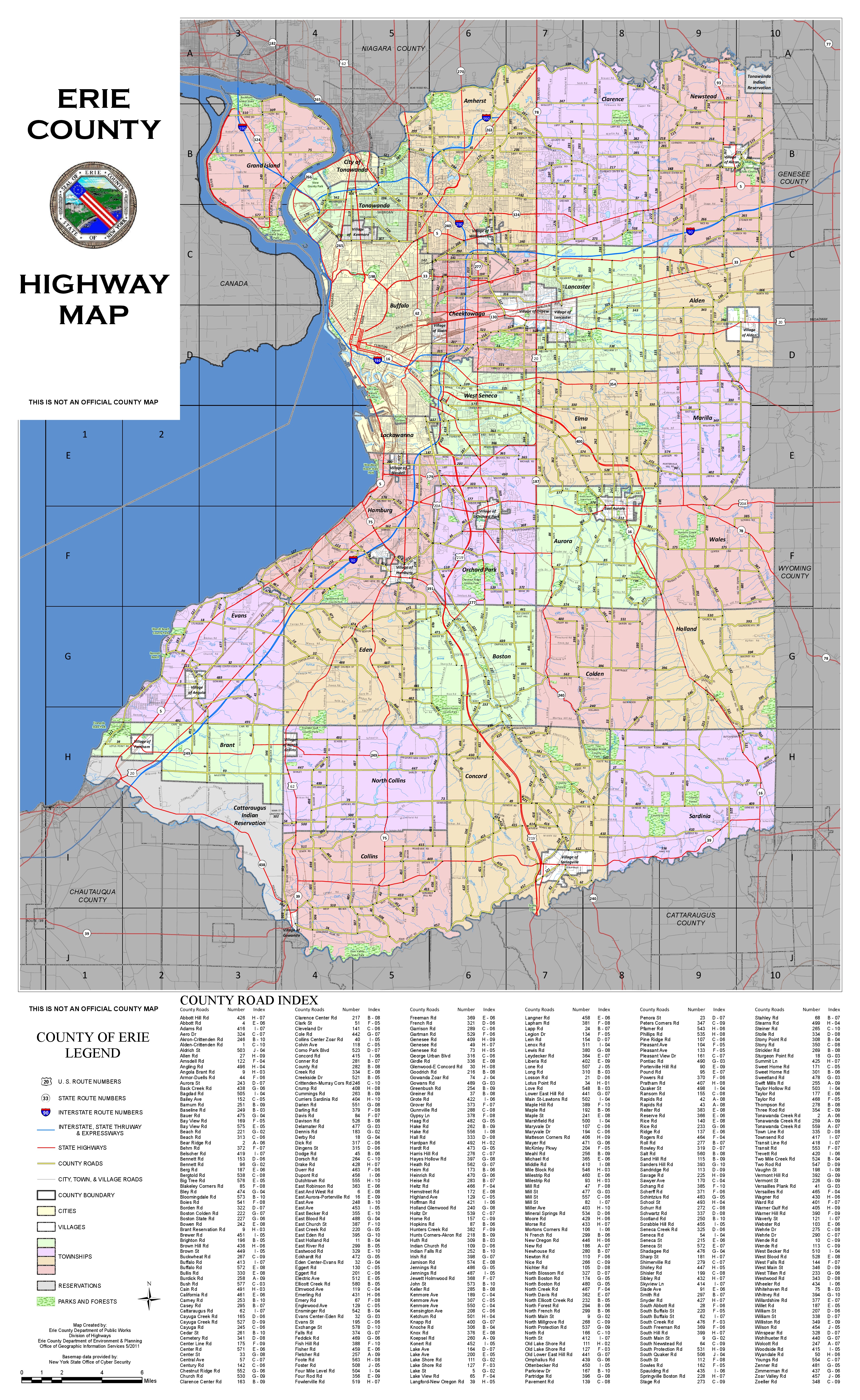 You will notice that Erie County maintains no roads in the City of Buffalo or the City of Tonawanda and only a small portion of one road (Abbott) in the City of Lackawanna. This creates an implicit subsidy for suburban sprawl. By the county maintaining the roads rather than each municipality doing so itself, the municipalities are able to keep property taxes artificially low. A large share of the property taxes that are collected in these municipalities go to the school districts. Therefore, developers are more likely develop new housing in an area with low taxes and better schools because they can make more money. In order to compete, the cities rely on property tax exemptions to incentivize development. This leaves municipal governments underfunded and property taxes high for those who aren’t otherwise exempt.

Frequently the causes of suburban sprawl include government insured FHA mortgages for veterans, redlining in poor and predominantly African American communities, highway construction through city neighborhoods, the supreme court case Miliken v. Bradley and (in New York’s case) home rule provisions limiting municipal annexation. Buffalo and Erie County had its fair share of those issues. However, on top of that, unlike some cities that created urban growth boundaries to protect agricultural areas and forests, it provided a monetary subsidy that leads to the destruction of these places, that continues to this day. 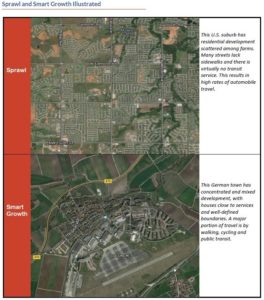 The roads mentioned at the start of this piece are located in Clarence, Newstead, and Lancaster. Each a relatively prosperous suburb. Residents on those roads include wealthy businesspeople and professional athletes. As you can see on the above map, the county maintains nearly all of the roads in these wealthy, outer ring suburbs, somewhat fewer roads in “inner-ring” suburbs like Cheektowaga, West Seneca, and Amherst and almost no roads in the higher density villages and cities. So effectively, poor people are paying for the maintenance of roads in prosperous areas and the roads in their neighborhoods. Consider that at least until very recently only ⅓ of the families in the City of Buffalo owned a vehicle so most people never use or benefitted from these roads. When considering the importance of tax revenue per acre to the sustainability of maintaining infrastructure this policy is not only a social and economic justice issue, but seriously stupid.

The financing and maintenance of roads is a complicated process with multiple levels of government involved and some funding, even for city roads, coming from state and federal sources, like the Community Development Block Grant Program (which was recently proposed for elimination). So this isn’t a simple issue where 100% of city road funding comes from local property taxes and 100% of suburban county roads comes from county sales and property taxes, because they don’t. Also, through the Erie County Tax Act the county does distribute a portion of the Sales tax revenues to the cities directly. But these distributions do not justify a massive sprawl subsidy in the form of unnecessary road maintenance with county tax dollars.

The county government expends a significant amount of money, as required by the State, to fund healthcare and similar subsidies for low-income folks. Once upon a time Erie County Legislators used these mandatory expenditures to justify shifting the burden of road maintenance for their suburban municipalities onto all county residents (many of whom live in the city). This doesn’t make any sense from a regional planning perspective. By the way, Erie County and Niagara County comprise one of the only regions in New York State that doesn’t have a regional planning commission. They did, but it was disbanded in 1990, because it was deemed “too expensive.”

Instead of building roads for relatively small numbers of wealthy people to live on, why not spend money on building complete streets in high density mixed-use areas so the greatest amount of people benefit? If someone chooses to build a house in a suburban or rural area, they should bear the true costs of that decision and the rest of us should not have to pay for it. If the cities were growing, fully developed, and all existing infrastructure was 100% utilized the current road situation would be more defensible as it could provide affordability by opening up additional land to development. However, the reverse is true. The area is not growing and there are vast amounts of existing cheap land throughout the county’s three cities.

Interestingly, many people in the suburbs are also unhappy with the situation because the vast amount of roads that the county is responsible for maintaining are in disrepair. Even the notable sums above are insufficient to properly maintain the roads. Many residents, in Clarence in particular are calling for the county to fix their roads, and if that is not possible, for the town to take the road back from the county. However, town leaders and Clarence and other locations have refused to do so until the roads are repaved and since these roads are infrequently used they are low priority repaving, resulting in a political stalemate. In general, low density areas do not generate the tax revenue necessary to maintain such infrastructure and in much of the country roads are being returned to gravel conditions.

$135 million over 5 years is no small amount and it is not a sustainable, responsible use of funds. These county roads do not provide a valuable economic return. With $135 Million the County could provide $50,000 micro-enterprise loans to 540 businesses every year to encourage entrepreneurship in the county’s lagging commercial districts. The county could explore providing sales tax exemptions on locally grown or produced products to stimulate business development within the county, which would exponentially increase prosperity through the local economic multiplier effect. The county could build a new state of the art library, convention center, park, museum or business incubator. Instead, the county is effectively using your tax dollars to decrease property taxes for wealthy people in Clarence.

Wellington, Florida used $5.2 million of its sales tax revenues to build improvements to two local parks. Kansas City used around $6 million sales tax revenue to help finance its streetcar system. Minneapolis has allocated sales tax funds to assist in the financing of the Vikings new football stadium. It’s not to say that those are the absolute best uses of such funds. However, subsidizing sprawl development is clearly not the best use.

In the age where many areas of the country and New York State are touting “smart growth” made up of dense neighborhoods and commercial districts, complete streets with alternative transportation modes and sustainable energy and water management, Erie County’s archaic roads policy are more akin to “dumb growth,” subsidizing unsustainable, low-density development, through high sales tax rates that make the Buffalo Niagara region less economically competitive.

The County also maintains 800 miles of sewer infrastructure.  Erie County’s annual sewer budget for is approximately $37.5 million, or $46,250 per mile or $8.76 per foot.  Amherst estimates that extending sewer lines costs between $40 and $90 per foot. Buffalo residents will be well aware that they pay a specific “user fee” for sewer services. The area’s sewer infrastructure is mostly obsolete “combined sewers” which push human waste into waterways following significant rain events and drastically require upgrades.

This issue has not gone totally unrecognized in the Erie County Legislature.  As recently as 2015 the County has proposed creating a “Road Fund” with increased revenues from automobile assessments to help maintain the roads. However, that is treating the symptom and not the cause and would do little for equity and may just cause residents to go outside of the county to purchase cars.

County Legislator Patrick Burke has called attention to this issue in the past. Eventually Legislator Burke proposed the Erie County Anti-Sprawl Act which would re-institute Regional Planning in the County. The Act also has provisions to address the road situation but it has yet to be voted on. Recently elected Legislator April Baskin has also expressed support for this measure.  Also, County Executive Mark Poloncarz has supported the concept of municipalities assuming control of the roads generally and the county sets aside $1 million per year to repave roads and return them to municipal control. This year, the Village of Williamsville will be taking over freshly repaved Garrison Road from the county.

Unfortunately however, the situation has yet to be solved in a comprehensive way. Ideally, the County should create a date by which it will divest 90% of its existing roads back to the municipal governments and perhaps having some “at-large” members would make this more politically feasible. The 1994 Excel Report highlighted over 200 miles of road that should be transferred from the county back to municipal control. Call your county legislator today and tell them to start here, and while they’re at it, to pick up a few in the cities to promote redevelopment and infill over sprawl. Or do nothing and think of the road in Lancaster you are helping to repave every time you buy a coffee and try to avoid the potholes on your way to work. 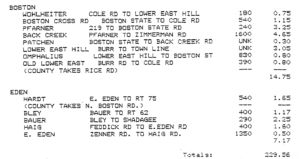 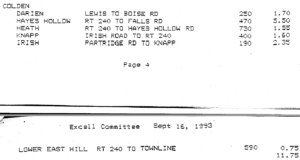 RICHARD ROGERS – Rich is a Buffalo, NY attorney, planner, and urbanist. He enjoys learning, exploring, playing rugby, and backpacking. He dreams of a high density city where he can ride his bicycle to a trailhead and go backpacking.